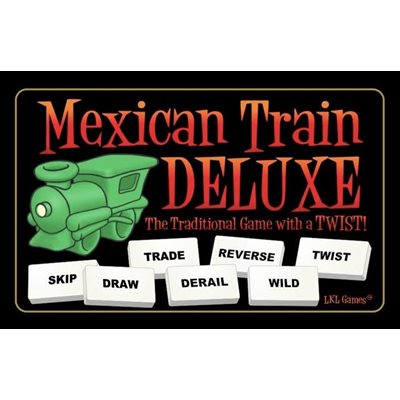 Mexican Train Deluxe is a game played with a set of Double Twelve Dominoes. There are words added to the game allowing you to change the course of the game. The object of the game is to play all the dominoes in your hand by playing the dominoes on one of many trains (a line of dominoes). You can play 1 to 13 rounds. Each round starts with a double domino in the center of a Hub. Every player has their own train and there is a train available to all called the Mexican Train. When a player is unable to play a domino from their hand, they put a marker on their train. The marker stays on their train until they play a domino. Other players can play a domino on another players train while their marker is up. The added words add a level of strategy and risk to the game. The words are Skip, Wild, Trade, Reverse, Draw, Twist, and Derail.

Game play is divided into rounds. A round ends when a player plays the last domino in their hand. Other players add up the points they have left in their hand. Points are either the number of dots on the dominoes or the value of the words. The game is over when the last round has ended. The player with the least points is declared the winner.